“Warhol in Colorado” at The Powers Art Center 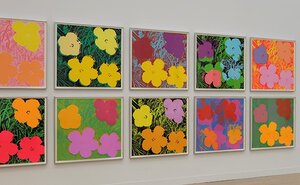 “Warhol in Colorado, The Artist’s Relationship with John and Kimiko Powers” 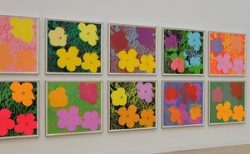 “Warhol in Colorado – the Artist’s Relationship with John & Kimiko Powers” is a classic exhibit of Andy Warhol’s numerous portraits and complete portfolios of “Marilyn” and “Flowers” will open in Carbondale on November 30, 2021 and run through October 15, 2022. The exhibition is comprised of works from The John and Kimiko Powers Collection, now under the stewardship of the Ryobi Foundation.

John and Kimiko Powers first met Warhol in New York before the artist was well-known. John was impressed to see that Warhol was working without an assistant, and he decided to commission the artist to make a portrait of his wife. From then onward, Warhol and the couple became good friends.  John and Kimiko visited the artist at the Factory and joined him for dinner regularly while they lived in New York.

When John Powers joined the Aspen Institute for Humanistic Studies, he invited Warhol to present his work there as part of the Aspen Center for Contemporary Art, an artists-in-residence program.  Warhol became a frequent visitor to Colorado, enjoying the lively scene in Aspen and dinners in Carbondale with John and Kimiko Powers.

This exhibit will highlight the unique relationship between the artist and the collector, representing Warhol’s classic works on paper as well as various unique pieces not previously shown at the Powers Art Center.  Many works will focus on the sincere friendship between artist and collector.  Although Warhol made portraits of a number of celebrated women by 1972, Kimiko Powers was one of the first commissioned portraits the artist completed.  Melissa English, Director of the Powers Art Center, often comments, “Warhol especially loved Kimiko and was taken by her classic Japanese style, which inspired him to create over twenty-five portraits of her in his iconic style.”

The Powers Art Center is pleased to collaborate with the Aspen Art Museum in bringing two different experiences of Warhol’s work and time in Aspen to the Roaring Fork Valley. During the Powers Art Center’s exhibit, the Aspen Art Museum will be the sole U.S. venue for the major international retrospective Andy Warhol: Lifetimes opening December 3, 2021 and running through October 2022.